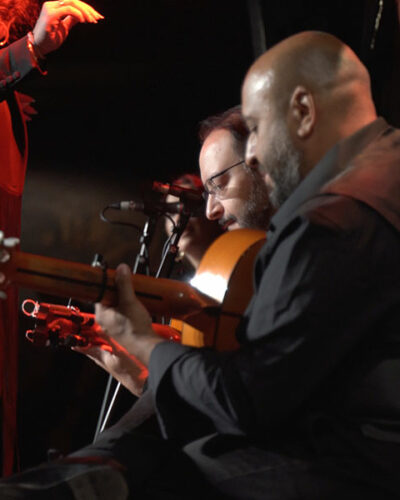 Mario Montoya, a renowned guitarist from Madrid, began playing the guitar at the age of eleven with his brother and uncle Ramón Montoya. At the age of sixteen he started playing in different tablaos in Madrid and later founded the musical group “Caño Roto” together with the guitarists Jesús de Rosario, David Cerreduela and the singer Antonio Amador. Merche Esmeralda’s company decides to add the group for the show “Mujeres” in 1996. In the same year he joins the company of Sara Baras, of which he is a founding member with more than 2000 performances worldwide, and composer in all the works created. Together with Mariana Pineda, he performs orchestrated music under the direction of Manolo Sanlúcar.

He has participated as a musician in films by Carlos Saura such as “Iberia” (2005), “Flamenco Flamenco” (2010) and “El Barbero de Picasso” by Enrique Morente. He has composed original music for the short film “Flamenco D’anza”, winner of the first prize in the short film contest “El Pópulo en escena” 2008.

He is selected as a jury for the singing contest “Silla de Oro “in Madrid in 2010. In 2014 he participates in the posthumous tribute that the mythical dancer Vladimir Vasiliev made to his wife Ekaterina Maximova at the Bolshoi Theater in Moscow . Mario was the first flamenco guitar to be heard in the temple of Dance par excellence, besides having stepped on the boards of the most important stages, such as the Royal Theatre in Madrid, Opera House of National Grand Theatre in Beijing, Sydney Opera House, Royal Albert Hall in London, Théâtre des Champs-Élysées in Paris, Teresa Carreño in Caracas, Teatro Colón in Buenos Aires, El Liceo in Barcelona, and many more.