Secrets of the tablao

Secrets and stories of the Tablao

Since the beginning, our local has kept a lot of stories and secrets that, in a low voice or loudly, have filled the nights of our tablao with character.

These are some of the most famous gossip, but you know, the story has only just begun and each era creates a lot of new anecdotes that will continue to mark the personality of our unique local.

You may be the protagonist or witness of the next story.

As the epicenter of the flamenco world, Villa Rosa was the springboard for many artists, although they did not always go directly to the stage.

It is said that the famous cantaor Miguel Molina started at the Villa Rosa, but as a purse-saver, as the security guards who prevented pickpockets and pickpockets from robbing customers in the heat of the party were called at the time. It was during a staff break when his bosses heard him sing and were amazed. Obviously, they changed the functions of the young Miguel who went on to perform on the stage.

A similar case was that of Juanito Valderrama, who started out working as a waiter, and was discovered by pure chance when he was singing in the staff locker room.

The king Alfonso XIII, in his numerous nocturnal forays through the night clubs and party places of the Capital, he was a regular at this place. Rumor has it that His Majesty used to go to Villa Rosa through the passageways that connected the Tablao and the Palacio Real, not to be seen openly by the people.

In the cellars of the premises, the entrances to the 3 subway passages dug by the Arabs in the 10th century, which guaranteed direct and privileged access to the premises or to some of its private rooms, can still be seen.

"In the cellars you can still see the entrances to the three subway passages dug by the Arabs in the 10th century."

One effectively linked the premises to the Plaza de oriente and the Palacio real, another led to the Plaza de Neptuno where we can find the historic luxury hotels Palace y Ritz. The third, already walled up, it is not known exactly where it goes.

Visit in person the passages of flamenco history

The lure of Hollywood and the coated paper

In the 50’s and 60’s Madrid became an exotic and attractive destination for some international personalities.

The American writer Ernst Hemingway, Fascinated by popular culture and Spanish art and all that surrounded our folklore, he visited the Villa Rosa to experience the roots of flamenco.

Also Hollywood actresses attracted by bullfighting and flamenco such as Audrey Hepburn or Ava Gadner.

In fact, Ava Gardnerincluded the Villa Rosa in her usual and well-known expeditions through the nightlife of Madrid, where she met important figures of art and the world of bullfighting, such as Luis Miguel Dominguín, with whom it is well known that she lived a brief but very intense romance.

Enjoy the history and art of flamenco in a unique setting.

Scene from the movie “Tacones Lejanos” filmed in the tablao, where you can recognize the decorative murals of the place.

In addition to the glove scene of Miguel Bosé in “Tacones Lejanos”, the tiles and arches of the Villa Rosa have served as movie sets on other occasions.

In 1993 Rocio Jurado and Paco Rabal inhabited the VillaRosa in the remake of the movie “La Lola se va a los puertos”.

In 2015 it will be one of the locations of “Ocho apellidos catalanes”. In one of the most hilarious scenes of the duo formed by Karra Ejalde y Dani Rovira. 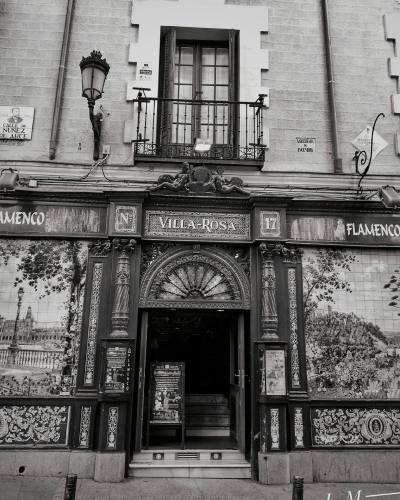 The oldest tablao in the world 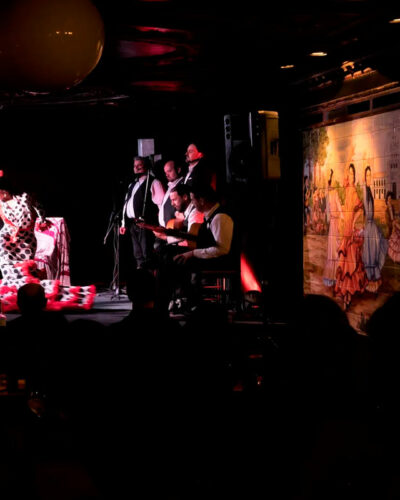