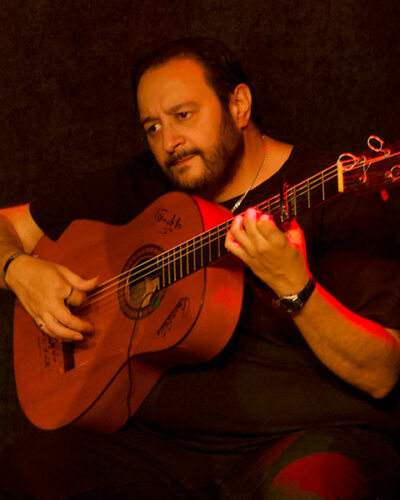 Born in Madrid, in the neighborhood of Caño roto, he began playing the guitar at the age of five, under the guidance of his father and teacher, “El Entri”. At the age of nine he participates in an International Talents contest on Norwegian television, which leads to a tour throughout Europe. In his adolescence, he began to form part of the Company of the master Antonio Canales.

In 1998 he created the music for the shows “Sensaciones” and “Sueños” by Sara Baras, with whom he toured around the world. In 2000 he composed the music for the play “Juana La Loca”, awarded three times in the Max Awards, premiered at the Bienal de Flamenco in Seville with great success both there and in Japan, Mexico, Chile, Brazil, Venezuela, Great Britain and France.

He composed the music for the shows “Minotauro” by Antonio Canales and “También muere el mar” by Carmen Cortés. He has collaborated in the albums “Cuando el río suena” and “Brillo de luna” by the singer Guadiana, and then continued collaborating in “Directo desde Casa Patas”, “Mírame” by Mercedes Cortés, “Caído del Cielo” by Pepe Luis Carmona, “Sembrando Inquietudes” by Ramón Jiménez. He has directed and produced “Juana La Loca, vivir por amor” by Sara Baras and has participated as a soloist in the album “La Nueva Escuela de Guitarra Flamenca”, nominated as Best Flamenco Album in the Latin Grammy Awards 2003.

Jesús de Rosario, after a long career, presented his album “Sin Tanto”, his solo debut, where he offers a repertoire that includes bulerías, rondeñas and rumbas. A work that counts with the collaborations of Sara Baras, Tomatito, Antonio Carmona and Bernardo Parrilla among others.